In the mid-1950s, Enzo Ferrari was looking for a car that could compete and win under classes newly updated by the FIA. With a 250 GT road car already on the production line, it made sense to prepare the high-performance grand tourer for duty as a competition-grade sports racer. Famed engineers Gioacchino Colombo and Giotto Bizzarrini had large parts to play in creating one of the finest iterations of Ferrari’s fabled 250 series. The Ferrari 250 GT LWB Berlinetta is one of the most influential and impressive automobiles produced in the company's illustrious history, as it helped to establish the marque's dominance in racing in the GT class. With the 3.0-litre Colombo V-12 engine fitted to Ferrari's 2,600-millimetre wheelbase chassis, numerous highly desirable Ferraris that followed in its footsteps, including the 250 GT SWB Berlinetta and the 250 GTO, can directly trace their roots to the 250 GT LWB Berlinetta. With incredible alloy coachwork that was designed by Pininfarina and hand-built by Scaglietti, this was a car that was just as beautiful to look at as it was exciting to drive.

The 250 GT LWB Berlinetta proved its worth at the Tour de France in 1956 where an early example of the model (chassis 0557 GT) raced to victory with Alfonso de Portago behind the wheel. It is worth mentioning that this was not just a few laps on a closed course, but a multi-day event consisting of 3,600 miles of all-out racing, including six circuit races, two hill climbs, and a drag race. The fact that the 250 GT LWB Berlinetta came out on top of such a gruelling event spoke not only to the performance of the car but also to the level of craftsmanship behind it. 1956 would not be the only year where a 250 GT LWB Berlinetta would take 1st overall at the Tour de France. Olivier Gendenbien went on to place 1st overall for the next three consecutive years, cementing the car's reputation in not only motorsport but also automotive history and earning the nickname of "Tour de France" aka “TdF” to commemorate its success over four years of racing throughout the French countryside. It is the most successful competition 250 GT Ferrari model, as it has garnered more victories than any other model, including the revered 250 GTO.

During its 4 year production (1956 to 1959), only 77 Tour de France 250 GT were produced which are divided in 4 series depending on the number of louvres between the side and the rear window. The first series had no louvres (14 cars), the second 14 louvres (9 cars), the third had 3 louvres (18 cars) and the fourth series had one single louvre (36 cars). All the 1-louvre cars used the Tipo 128D motor which had minor revisions to the block, timing chain casing, stronger connecting rods and twin Marelli distributors. New cylinder heads offered larger valves and intake passages. The result was an engine that could produce 235 to 260 bhp depending on tune. In order to comply with new Italian road regulations the last 10 cars of this fourth 1-louvre series were built with open headlights.

Our car with VIN Nr 1401GT is the 10th and last car of the open headlight series and is also the very last 250 GT “Tour de France” ever built. During its past 64 years it has only had 6 owners with the prior Swiss owner having enjoyed this car for 38 years! 1401GT was delivered to Italian racing driver and early Ferrari customer Luigi Taramazzo on 23rd of May 1959, and was painted in striking Gold metallic (Oro Chiaro Metallizzato). First time out at Monza the following month, Taramazzo finished 9th in the annual Loterria GP. He then went on to win the Garessio-Colle San Bernardo mountain climb in Italy. After a final outing at the Trieste ­Opicina in the summer of 1959, Luigi sold the car to Swiss amateur racer Gerard Spinedi of Geneva, Switzerland.

Spinedi did two hillclimbs in the late summer of '59 and finished 2nd in both, at Marchairuz and Vaduz-Triesenberg. The following year Spinedi took part in road/rally type competition events ideally suited to 1401GT. At the 1960 Tour de France and Rally de Geneva he was partnered by his wife Aghdass in the co­-driver's seat. 1401GT's recorded finishes for the year would be a 12th in the GT-Class at the Coupes des Alpes and a 9th in the Auvergne 6 Hours at Clermont-Ferrand. At the end of the year Spinedi took delivery of a new short wheelbase Berlinetta (2159GT painted also in gold) so 1401GT was put up for sale. It was bought by Ferrari marque specialist and author Rob de la Rive who repainted the car in red, changed its engine (for unknown reasons) to a 250 PF engine (Nr 1109) and kept 1401GT for 10 years until selling it in 1970 to Karl Hasler of Wettswil, Switzerland. In 1976 Hasler sold the car to Swiss historic racer Plinio Haas who raced 1401GT from the day he bought it until he passed away some 35 years later!

In early 2014 the car was sold by Plinio’s son Felix Haas to its current owner whose 1st task was to reunite his newly acquired 250-TdF with the car’s original 1401 engine which was found to be installed in Paul Schouwenburg’s Ferrari 250 TR Replica. When this reunion was successfully completed, the car subsequently underwent an exceptional concours-quality restoration in its distinctive Oro Chiaro colors with matching Maroon leather interior. The restoration project was managed by Gipimotor (Brussels) in cooperation with renown Carrozzeria Autosport, Italy for bodywork & trim, Corrado Patella (Autofficina Omega) for engine, gearbox and other mechanicals, and under the general supervision of Ferrari Classiche. The culmination of this multi-year restoration was achieved at the end of 2018 when 1401GT received its coveted Red Book Ferrari Classiche certification. Since then, the car has only made a few selective appearances at the Zoute concours d’Elegance - where it won the Post-War Closed Car class - and was exhibited at the "75 years Ferrari" exhibition at Autoworld Brussels.

As the last produced Tour de France Berlinetta, 1041GT represents the ultimate evolution of one of the most beloved models in Ferrari history. This car is all the more desirable given its solid period competition history, splendid and distinctive color scheme and the quality of its restoration. While any 250 GT Tour de France is regarded as a top-tier collector car, this example certified by ferrari Classiche, is a star among the best and presents a ticket to almost every important event worldwide. 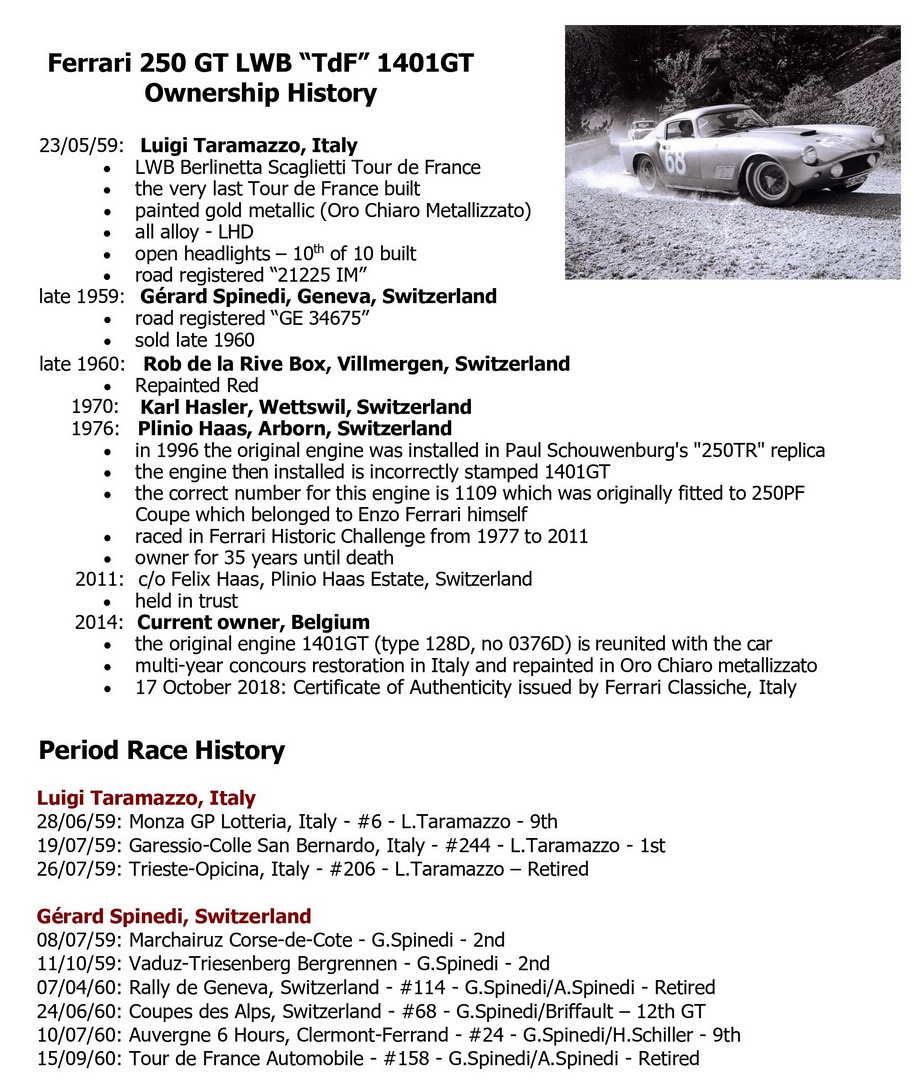