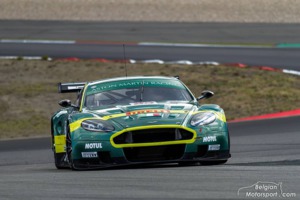 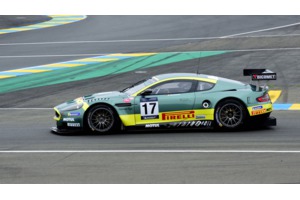 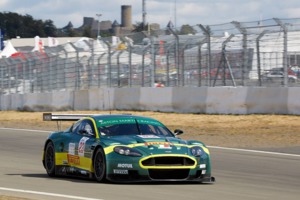 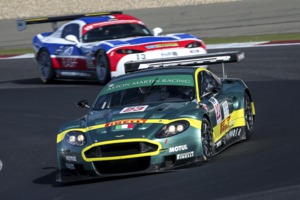 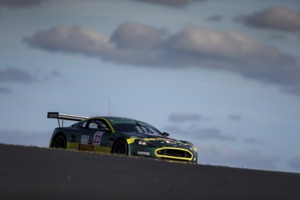 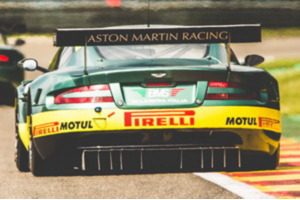 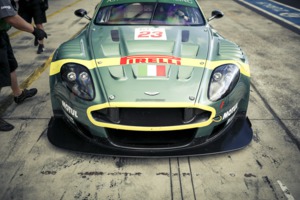 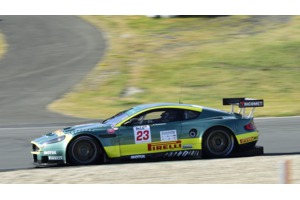 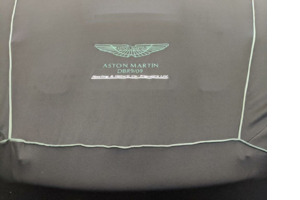 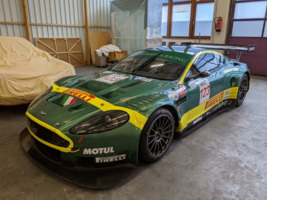 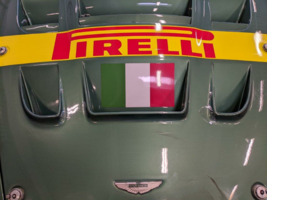 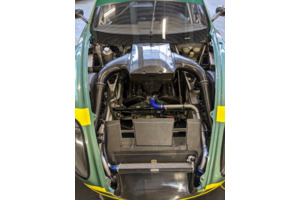 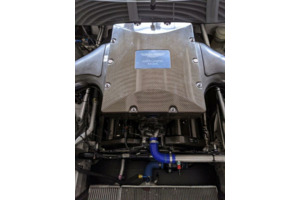 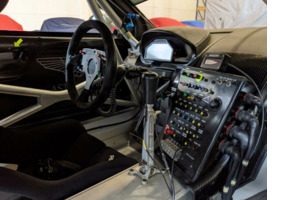 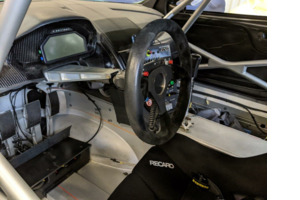 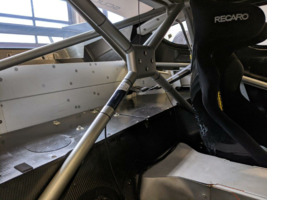 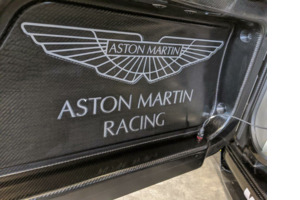 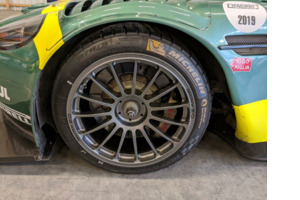 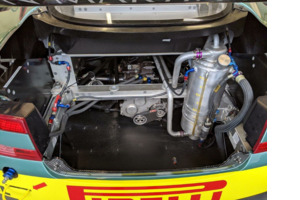 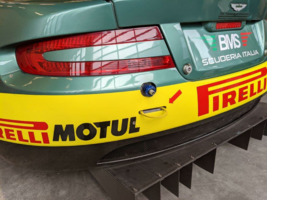 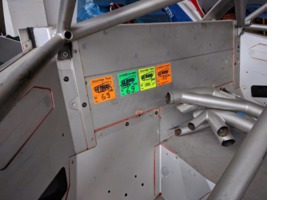 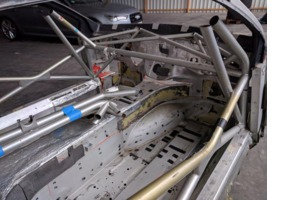 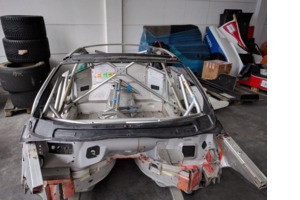 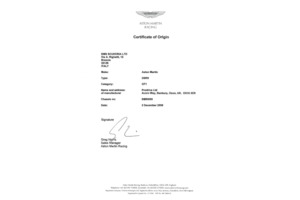 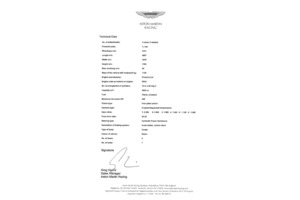 Born of the burgeoning production-based GT category in Europe and America, and marking Aston Martin's first return to international racing since 1989 with the Group C AMR1, the DBR9 took a remarkable victory on its 2005 race debut in the arduous Sebring 12 Hours. Upsetting the favored and tried-and-tested Chevrolet applecart by beating the new Corvette C6.Rs, the striking British machine finished fourth overall and first in the GT1 class, and topped it all by setting fastest lap. The Chevrolets took 2nd and 3rd. It was a remarkable result given that Aston Martin Racing was merely hoping for its DBR9s just to finish the grueling event in what was a test and development year; one in which a privateer DBR9 would  also go on to win GT1 in the Nürburgring 1000KM and take overall victory in the FIA GT Championship round at Bahrain.

Initial  development of the DBR9 had only begun late in mid-2004. Based on the DB9 road car, and publicly unveiled in November the same year, it was the result of what has remained an enduring partnership between Aston Martin and Banbury, England-based Prodrive, the renowned race/rally preparation specialist founded and owned by ex-World  Rally Championship-winning navigator David Richards, with AMR wholly owned by Prodrive and solely responsible for design, development, and management of the racing program. The DB9's extruded aluminum/composite chassis was modified to incorporate a Prodrive-designed rear sub-frame and a high-strength multi-tubular frame/roll cage, over which the body panels, all formed in carbon fiber composite, bar an aluminum roof, were fitted, with the rear and side windows formed in polycarbonate; aerodynamic modifications included an additional air intake and front spoiler/splitter at the front, a flat floor and a high wing and diffuser at the rear. The suspension, comprising double wishbones/coil springs all round, was suitably stiffened and lowered with braking courtesy of all-round 13-inch ventilated, carbon/ceramic Brembo discs/six-pot calipers behind  18-inch OZ forged magnesium wheels, 12.5 inches wide at the front and 13 inches at the rear. Complete with a 625-bhp/550 lb.ft version of the DB9's 5,935-cc quad-camshaft V-12 all-alloy engine which was mated to a six-speed, sequential Xtrac transaxle, the overall weight of the car was 1,100 kg/2,425 Ibs. (the minimum allowed  in GT1) and a whopping 610 kg/1,344 lb. reduction against the street DB9's 1,710 kg/3,769 Ibs.

Chassis numbering of the DBR9 was designed to reflect that of the 1950s DB3S sports-racer, with Works cars using DBR9/1-DBR/10 and customer cars DBR9/101 onwards. For 2006 and 2007 there were two officially Works-backed teams,  Larbre Competition and BMS Scuderia  ltalia, the former's task to run in the Le Mans Endurance Series and the latter's to contest the FIA GT Championship, with AMR itself concentrating mainly on the Le Mans 24 Hours while also taking in selected international events; the main opposition would come from Ferrari  550M/575M Maranello’s, Maserati MC12s, Chevrolet Corvette C6.Rs, and Saleen S7Rs.

As is the practice with many Works cars in GT racing to this day, the original private owner bought our car, chassis DBR9/9, prior to its first race on the basis that he would take possession of it in race-ready, refurbished condition once its racing career was over. Its impressive race history (the full race results can be found in the history section below) lasted just 2 years (2006 and 2007) and came to a premature end due to an accident at the 2007 Spa 24 hours. BMS Scuderia then rebuilt DBR9/9 with a new Prodrive chassis which was given the same DBR9/9 chassis number, complete with a fully refreshed engine, transmission, and running  gear upon which the original owner took possession of the car in 2008 – together with its original, damaged chassis – where it has remained in immaculate condition for several years. In 2017 this works Aston Martin DBR9 was sold through auction to its current owner who has since shown DBR9/9’s capabilities on the race track in both Masters Endurance Legends and Peter Auto’s Endurance Racing Legends always being looked after by renowned preparer Tim Samways. DBR9/9 is sold in immaculate condition throughout with very low hours on engine/gearbox and with a current fuel cell. It would just need crack testing and comes with a good spares package and running tools.

Rarely does one get a chance to buy such a magnificent factory race car and one of only 10 Works DBR9s built, with an impressive race record that includes four FIA GT Championship podium places at some of the greatest and most demanding circuits in the world. DBR9/9 is worthy of any great racing car collection and is also ready to continue its racing career in the multiple Legends series both in Europe and USA.

In 2006, Aston Martin Racing BMS would finish 2nd in the GT1 Teams Championship, aided in no small part by the tremendous performance of chassis DBR9/9, which finished 3rd in Silverstone's prestigious three-hour RAC Tourist Trophy on its race debut, Fabio Babini/Fabrizio Gollin also taking 3rd at the Brno 500 KM with Babini/Mateo Malucelli repeating the position at the Hungaroring 500KM; one of four AMR BMS chassis, DBR9/9 was uniquely equipped with a data acquisition system to facilitate tire development. Meanwhile, in the Le Mans Endurance Series AMR Larbre took both the GT1 Team and Drivers Championships, and AMR finished an extremely close 2nd place in the American Le Mans Series, while the DBR9 also won the FIA GT Championship's manufacturers' title, further emphasizing the DBR9's front-running pace.

The following season saw DBR9/09 take 6th in class at Le Mans with Babini/Jamie Davies/Malucelli, backing up AMR's class winner, AMR Larbre's 3rd in class and AMR's 4th, an exceptional result for Aston Martin in the world's most  grueling endurance race and in which  all six DBR9s entered finished. DBR9/9 also took 3rd place at the Oschersleben Two Hours with Davies/Babini but at the following Spa-Francorchamps 24 Hours, its racing career ended when it suffered a major crash.